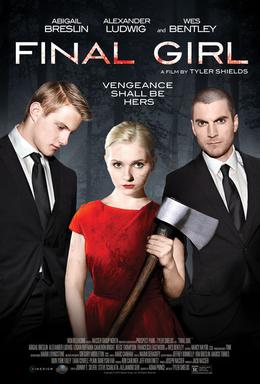 seems to be rather divisive among horror fans, likely because it does not follow the typical slasher film narrative at all. In some ways, it inverts it. What it does is offer a fresh interpretation of the “final girl” character as described by Carol Clover.

Whereas the classic slasher film features a masked misfit who dispatches several disposable victims before being vanquished by the final girl, this movie has four well-dressed Nice Guys who make a sport of hunting and killing young women as a sport. The setup is a lot more like The Most Dangerous Game than Friday the 13th, for instance.

Unlike the typical slasher film final girl who discovers her inner strength under duress and then and fights back, protagonist Veronica was always strong. She was trained as an assassin from childhood by a mysterious shadow organization, and assigned to kill the four murderers. Much of the film becomes her stalking them, not the other way around. As a nice touch, she doses each of the men with hallucinogenic drugs so that they can experience their own worst fears before they die.

The look of the film is also very different from that of the classic slasher film. The lighting and color scheme is deliberately artificial and stylized, and the characters dress and behave as though they were transported from the 1950s.

This is not a film for those who want a conventional slasher film, but I will recommend it to fans of women’s revenge films.